The era of the Post-Heroic Leader? 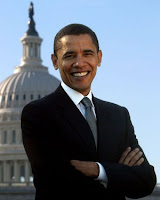 Put your politics aside for a minute and take a look at the personal qualities of our new President-elect Barack Obama. Does he appear to reflect a new style of leadership?
Early on, I worried that we didn't know much about the man since he was fairly new on the national scene. However, as the political season dragged on (and on and on) I found myself intrigued. My initial concerns....is he just a good speaker?....is the press being too nice?....is he lacking in experience?.....were replaced by a sort of fascination with his consistency.  His consistent use of the word "we" rather than "I". His consistently calm manner. His tendency to take the long view, and see the big picture. His thoughtful, reflective style which involved seeking advice from others rather than being reactive, impulsive or self-focused.
For those unfamiliar, the current thinking in leadership development has focused on  the concept of Heroic vs. Post-Heroic Leadership.  Heroic leadership describes leaders who see themselves as solely responsible for the actions and results of their companies/countries/communities.  They are in essence "Heroes" who are expected to take all the responsibility and blame as well as all the credit.  We tend to glorify heroes but, of course, when they don't live up to our expectations we are inevitably disappointed.
The Post-Heroic Leader, however, is more collaborative and relies much more upon the people he/she is surrounded by. Post-Heroic leaders are more apt to listen to, engage and seek the opinions of others realizing the best ideas sometimes come from unanticipated places.
When comparing John McCain and Barack Obama one cannot avoid the Heroic vs. Post-Heroic comparison, especially given that John McCain is a true American War Hero.
The results of the U.S. presidential election were definitive but still relatively close in numbers if you consider 46% to 52% popular vote. And there are many factors which help to explain these results. But I do find myself wondering....is it possible that we are indeed moving into the era of Post-Heroic Leadership? I guess we will find out soon enough!
Posted by Betty Doo at 3:03 PM